You are here: Home1 / missing marines 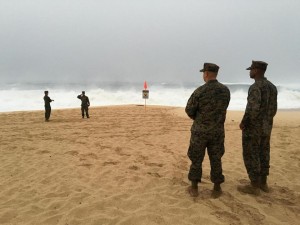 Search and rescue crews are still holding out last hopes for finding the twelve Marines missing in Hawaii since late Thursday night, when their Super Stallion helicopters failed to return to base.

Searchers have found life rafts and other debris that were carried aboard the aircraft, but still have had no sign of the crew members who were on board. The debris was found on the North Shore of Oahu, where the two helicopters were involved in a midair collision during a nighttime training mission.

So far, the search has spanned more than 18,000 square miles, with a Navy warship, a Coast Guard cutter, several helicopters, jet ski teams, sonar, and dozens of Marines along the shoreline all scouring the surf for signs of life. The first two days of the search were hampered by 30 foot waves from a storm off the coast of Hawaii. By Sunday, the weather had calmed, allowing search efforts to continue at full speed.

Still a search for survivors, Chief Petty Officer Sara Mooers said on Monday, “We err on the side of caution because the last thing that anybody wants is to suspend the search when there’s still a possibility of finding somebody.” She added that survival was possible under a “best-case” scenario.

According to the Marines, crews wear personal flotation devices and receive training in survival swimming.

We join the rest of the country in sending out thoughts and prayers for the twelve crew members, who come from Oregon to Massachusetts and range in rank from lance corporal to major, and their families.