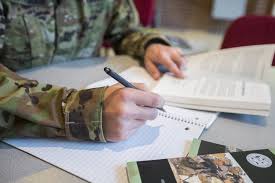 Using TA for technical credentials is one of five ideas that will go to the secretary of defense as part of the family council’s yearly recommendations for improving the lives of military families. The idea would have to go through a number of steps in any approval process.

A DoD family council wants service members to be able to use college tuition assistance (TA) for licensing and technical certifications — and to expand TA to military spouses. The DoD has worked with the Departments of Labor, Education and Veteran’s Affairs to develop many ways for you to pursue vocational and technical licensing and certification.

According to the U.S. Department of Labor electricians, carpenters, construction workers, police, and computer systems specialists will be the most sought after and highest paid workers in the U.S., making them ideal military veteran jobs.

Sergeant Major of the Army Dan Dailey has said one of his priorities for 2016 has been to push for expanding tuition assistance to pay for credentialing opportunities for soldiers — to allow soldiers to use TA to pay for civilian-equivalent credentials. Not every soldier wants to attend college, and this would help prepare them for their transition to civilian life and jobs for military veterans, Dailey contends.

But again, this program excludes spouses of more senior troops.

Furthermore, there may be times when the service member is unable to use the tuition assistance benefit due to circumstances, including deployment, but it might be the perfect time for the spouse to take classes.