You are here: Home1 / Military inspiration 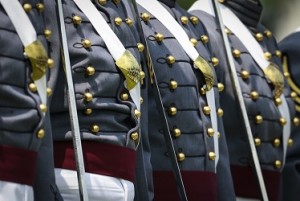 It may be an outdated recruiting slogan, but that doesn’t make it any less true today than it was in the 1980’s. That was the battle cry that brought many young Americans into Army recruiting offices during the Cold War. Soldiers today are still realizing their dreams through service in the Army, becoming all that they can be, and more.

Private First Class Nathaniel Okyere-Bour of the New Jersey Army National Guard is one shining example of this. Okyere-Bour is realizing his dream of attending West Point.

Okyere-Bour’s mother taught him the value of sacrificing in order to accomplish your dreams. She had always wanted to be a nurse. When Nathaniel was only three years old, his mother sent him to live with her family in Ghana, while she earned her bachelor’s and master’s degrees in nursing. Okyere-Bour moved back in with his mother once she was an intensive care nurse at a Manhattan hospital.

With his mother’s determination as an example, Okyere-Bour set out to achieving his own goals. As a teen, he gained admittance into New Jersey’s elite McNair Academic High School. As graduation approached, Okyere-Bour ambitiously applied to elite colleges, including Duke University and the University of Chicago. The young man was accepted into both schools, but couldn’t afford them. So instead, Okyere-Bour enlisted into the New Jersey Army National Guard in 2013, with a plan to use the force’s tuition waiver to attend Rutgers University.

But it was during basic training at Fort Jackson, South Carolina, that Okyere-Bour discovered his true calling. After Okyere-Bour’s battalion commander, who had attended the Military Academy at West Point, described what it meant to him to be a West Pointer, a chord was struck. From that point on, Okyere-Bour had his heart set on going to West Point.

As an enlisted man, Pfc. Okyere-Bour has proven himself to be among the best and brightest, with true leadership potential. His performance as a soldier, along with outspoken desire to attend West Point, prompted all of the officers in Okyere-Bour’s chain of command to write letter of recommendation for him.

In June, Okyere-Bour will join the U.S. Military Academy at West Point Class of 2019.

Military Connection: Soldier is Being All That He Can Be: By Debbie Gregory