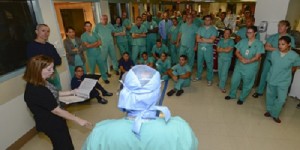 The U.S. military is preparing to defend its nation against the Ebola Virus.

The Department of Defense formed a 30-member team, comprised of ten critical care nurses, ten noncritical care in-patient nurses, five physicians who have experience with internal medicine, critical care and infectious disease, and five other healthcare professionals with infection control specialties. The team has been undergoing training at the San Antonio Military Medical Center so that they can be prepared to “rapidly and effectively respond to new cases of Ebola within the U.S.”

This is an unprecedented mission among the medical corps, one that, until now, could have only existed in a motion picture. If this were a movie, this group of military medical professionals would surely have a catchy name like “The E-Team.”

This team of doctors and nurses, from all branches of the military, make up the first line of defense for the American public. Americans know little about the Ebola virus, other than the horror stories that they see on the evening news. While a widespread Ebola outbreak is less likely to occur in the U.S. due to sanitation and access to medical care, rapid treatment and containment against the spread of the virus are crucial to ensuring that isolated cases don’t become epidemics.

The team was recently visited by the Army’s Surgeon General, Lt. Gen. Patricia D. Horoho. The general made the trip to San Antonio in order to show her appreciation to the men and women for their undertaking.

“I just wanted to be able to come by, to be perfectly honest, to look everyone in the eye and say thank you,” Lt. Gen. Horoho said. “Thank you very much for your agreement to do this…”

“We are very, very proud of those who are serving in military medicine,” Lt. Gen. Horoho continued, “and I think you should be proud that the nation, when it was most concerned, turned to military medicine.”

The military medical officials are not the only Americans who are appreciative of the work that these service members are doing. There are millions of American citizens who will breathe easier now that this team is on the job.

Like all members of the U.S. military, the members of the E-team hope that they never have to put their training to use. But these men and women will answer the call if needed, in service to their country.