You are here: Home1 / Military down-sizing 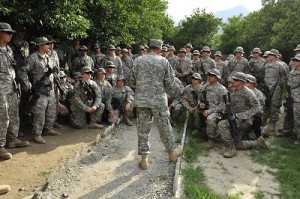 The U.S. Army is expected to make more cuts in personnel in an effort to meet DOD ordered force size reductions.

Back in June, the Army notified more than 1,100 Captains (O-3) that they were essentially being pink-slipped by the military. It was later revealed that 48 of those officers were serving in Afghanistan when they received the news. The dismissals were part of a military-wide effort to reduce the force-sizes of the standing U.S. armed forces. Each branch was ordered to reduce their ranks. Branches first incentivized early retirements for eligible personnel, then they utilized selection boards to determine which of their members they would involuntary separate.

In August, 550 Army majors (O-4) were given similar notices, and the Army has scheduled separation boards for lieutenant colonels (O-5) and colonels (O-6) for next year.

As the Army looks at future personnel cuts, there remains a strong possibility that some of the individuals selected for separation could be notified while serving in combat zones. The Army is expected to have soldiers in Afghanistan for at least another two years, and some of them could be among those selected for involuntary separation.

Once notified of their pending separation, personnel have nine months to transition out of their branch of service. That is why the Army prefers to notify their personnel as soon as possible, even if that means notifying them in a war zone. Deployed personnel who receive separation notices are generally returned state-side within a matter of days. For higher ranking officers, especially those in command positions, it could take up to 30 days to turn over their commands.