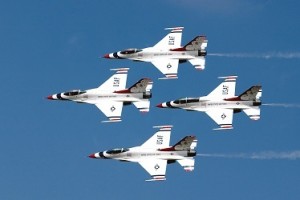 On May 25, 1953, the fledgling U.S. Air Force commissioned its first official air demonstration team out of Luke Air Force Base, AZ, designated the 3600th Air Demonstration Unit. Largely influenced by the Native American culture in the area, the unit adopted the name “Thunderbirds” after the legendary supernatural birds depicted in stories and paintings found in many North American native cultures.

Over the past 61 years, the USAF Thunderbirds have been creating a legend of their own, as millions of people have witnessed their aeronautic  demonstrations. The Thunderbirds embody the pride, professionalism and dedication of American Airmen, serving around the world.

Since 1953, there have been a number of changes for the Thunderbirds. In 1956, they moved their home base to Nellis AFB near Las Vegas, NV. They have also utilized several different aircraft over the years.

In over 60 seasons of touring, millions of Americans have been wowed and awed by the USAF Thunderbirds. The pilots demonstrate amazing control over their aircraft,  evident in the precision of their maneuvers. This can only be accomplished through thorough  knowledge of their aircraft. Many of today’s military aviators credit the USAF Thunderbirds, and the shows they saw as children, as the reason why they are in their profession today.

The USAF Thunderbirds have finalized their 2015 show schedule. The team is set to perform 71 demonstrations at 39 locations next year.

The Thunderbirds will perform its first public event of 2015 at the opening of Super Bowl XLIX in Phoenix, AZ on February 1st. The remainder of the schedule is as follows:

Include your family in the tradition of legendary American aviation by attending a USAF Thunderbird show in 2015.

To learn more about the Thunderbirds, visit www.afthunderbirds.com