You are here: Home1 / Mike Healy 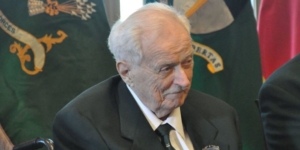 Maj. Gen. Michael D. Healy, 91, spent 35 years serving in the military, completing tours in Korea and Vietnam. Healy began his career with parachute training followed by attendance at a number of Army Colleges, including Ranger School.

Maj. Gen. Healy earned the nickname “Iron Mike” while serving as a young officer leading Army Rangers on combat patrols deep behind enemy lines in Korea in the early 1950s. The nickname, which stuck with him throughout his life, was a testament to his stamina and ability to take heavy loads, as well as helping others with their loads.

The Chicago native enlisted in the Army at the age of 19.

He entered the Korean War as a Company Commander with the Airborne Rangers, which at the time was a newly formed unit of the Army. Most of his career was spent in Vietnam, where he served five and a half tours, leading the 5th Special Forces group for almost 20 months, and earning him his first Distinguished Service Medal.

When he retired in 1981, Maj. Gen. Healy was the nation’s most senior Special Forces soldier.

Iron Mike’s legend made it to the big screen as the inspiration for John Wayne’s character, “Col. Iron Mike Kirby,” in the 1968 film “The Green Berets.”

Maj. Gen. Healy’s legacy would not be forgotten in the close-knit Special Forces community, according to Retired Sgt. 1st Class Cliff Newman, executive director of the Special Forces Association.

“He was one of the first Americans to go into Vietnam and one of the last to leave,” he said.

In 2016, Maj. Gen. Healy was inducted as a Distingished Member of the Special Forces Regiment. He had a special bond with the men he lead, and was a beloved hero of the Green Berets. He always credited his success to the men he lead.

In an interview, Maj. Gen. Healy said: “I would like to walk in the back gate at Fort Sheridan like I first did and say, ‘Yes, sir, I’ll go.’ But today, I’m in civilian clothes. My uniform is packed away.”

Maj. Gen. Healy will be buried at Arlington National Cemetery near his mentor, the late Gen. Creighton Abrams.