You are here: Home / Michelle Manhart 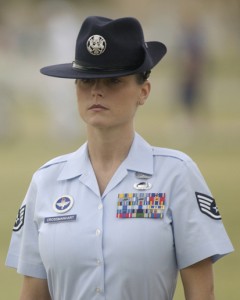 An Air Force veteran, mother of two, and former Playboy model was banned from Valdosta State University after taking an American flag from a group of demonstrators.

Michelle Manhart was detained by campus police after she took the flag from a group of protesters. “This flag belongs to the entire United States,” Manhart said on camera, clutching the stars and stripes as her daughter videotaped the incident. She was not arrested

“I did not want anything like this, but I got a call from a student who told me that the flag was on the ground, and they were walking on it,” said Manhart. “I don’t know what their cause is, but I went to pick it up because it doesn’t deserve to be on the ground.”

Manhart wasn’t wrong to say that damaged flags have to be disposed of properly. Both federal and Georgia state law outline rules for how the flag should be treated.Those penalties are rarely, if ever, enforced, however.

Manhart, a former United States Air Force military instructor, is no stranger to controversy. She was placed under investigation in 2007 after posing nude in Playboy magazine.

She was reprimanded and demoted as a result of the investigation and resigned from the service in 2008.

Although Manhart has previously appeared in a series of videos and photographs for the People for the Ethical Treatment of Animals, draped in the American flag, she said that there is a big difference between her actions and those of the demonstrators.

“We wanted to strip the human of all material items and stand behind the flag because if we don’t have anything, we still have this. We still have our freedom.”

Manhart said she has no regrets about the photo shoot and views it as a celebration of freedom, which she believes stands in stark contrast to the demonstration at VSU.

Manhart said she would like a letter of apology from the group and to take possession of the flag so she could dispose of it properly.

“I have seen that flag on caskets returning home,” Manhart said. “It was just the thought of those demonstrators standing on someone’s casket. I was so internally frustrated.”