You are here: Home1 / mental trauma 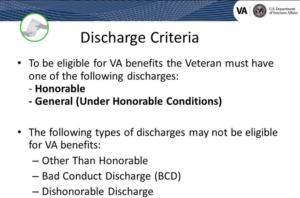 The U.S. Senate recently passed, on a voice vote, a proposal by Sen. Gary Peters, D-Mich., to help make sure traumatized veterans retain their G.I. benefits.

Peters, along with Steve Daines, R-Mont., Kirsten Gillibrand, D-N.Y., and Thom Tillis, R-N.C, had requested the measure as an addition to the annual National Defense Authorization Act. The proposal is aimed at helping veterans who may have been erroneously given a less than honorable discharge from the military due to negative behavior resulting from mental traumas such as post-traumatic stress disorder (PTSD) or Traumatic Brain Injury (TBI).

If the proposal becomes part of the final law, it would require Discharge Review Boards to consider petitions to change the discharge status of service members if they suffer from post-traumatic stress disorder (PTSD) or other mental trauma linked to their military service.

Being dishonorably discharged can cost service members benefits such as being eligible for Department of Veterans Affairs home loans.

“I am pleased that the Senate passed this amendment to support brave men and women who are suffering from mental health trauma experienced during their military service,” said Senator Peters, a former Lt. Commander in the U.S. Navy Reserve. “This amendment will help ensure veterans are treated fairly when petitioning their discharge status, and in turn, upholds America’s commitment to our men and women in uniform, who answered the call of duty in defense of our nation.”

“By continuing to overlook these cases, the Department of Defense is only amplifying the invisible wounds of war afflicting many veterans,” Senator Daines stated.  “I’m proud that this bill allows veterans to have their discharges reviewed, taking their PTSD, Military Sexual Assault or Traumatic Brain Injury into account. We’ve known there were many of our veterans who had been discharged without proper consideration. It’s a wrong we need to right.”

“So many of our servicemembers have developed PTSD and brain injuries while on active duty, many of whom were undiagnosed until long after their service was completed,” said Senator Tillis. “I am happy the Senate passed this amendment to provide a fair opportunity for these brave men and women to regain the benefits they lost as a result of conditions we now know were caused by the effects of the trauma they sustained during their service to our nation.”

“Our selfless and brave veterans should never lose out on the benefits they earned because of a health condition like PTSD or MST,” said Senator Kirsten Gillibrand, a member of the Senate Armed Services Committee. “I’m pleased the Senate has passed our bipartisan amendment to help ensure that the VA is taking care of all of our veterans, no matter what their condition is when they leave the military.”

In 2014, former Defense Secretary Chuck Hagel issued a memo to military records boards to provide for a consistent manner of dealing with veterans’ discharge upgrade requests related to post-traumatic stress disorder. This change from Peters and the others would effectively codify that memo.