You are here: Home1 / Marines Corps 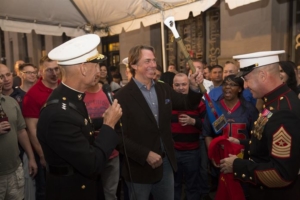 Gen. Robert B. Neller, commandant of the Marines Corps, says it’s time that his troops to step away from their cell phones.

Neller said today’s Marines have gotten a little too soft with their mod cons, and they need to get back to the more stereotypical Marine, which will serve them better on the battlefield.

Additionally, Neller feels that using mobile devices could give away troop positions to their adversaries.

Neller said, “What do you think the largest electromagnetic signature in the entire MEF headquarters emanated from? The billeting area. Why? Because everybody had their phone on.

The Navy has already come up with plans to reduce its reliance on modern electronics to make its force harder to trace. One of those plans includes sailors re-learning to navigate using the stars instead of GPS.

For the Marines to get back to basics in the field, they will need to eliminate fixed bases and stay on the move.

But in order to keep his Marines safe on the battlefield, Neller wants to see them go old school.