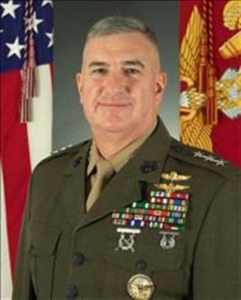 A Cobra pilot by trade, Walters currently serves as the deputy commandant for Marine Corps Programs and Resources.

Walters, who has been tapped to receive a fourth star, has served with a host of helicopter and test squadrons. He was the first commanding officer of Marine Operational and Evaluation Squadron 22 and has served as the assistant deputy commandant for Marine Corps Aviation. Walters led 2nd Marine Aircraft Wing (Forward) in Afghanistan.

He was commissioned in the Marine Corps in 1979 after graduating from The Citadel in South Carolina. He attended flight training in Pensacola, Florida.

Walters was designated a naval aviator in March 1981 and was assigned to Marine Aircraft Group 39, where he trained to fly the AH-1T Cobra helicopter. He was then transferred to Marine Attack Helicopter Squadron 169 where he served as the flight line officer.

In 1987, Walters deployed in support of Operation Earnest Will, the U.S. military’s mission to protect Kuwaiti tankers from Iranian attacks.

His awards include the Defense Superior Service Medal, the Legion of Merit, two Meritorious Service Awards and the Air Medal.