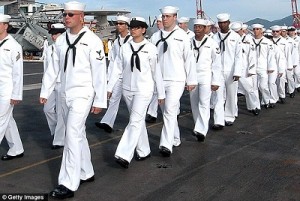 Unhappy with the amount of women serving in the U.S. Navy and the U.S. Marine Corps, Secretary of the Navy (SECNAV) Ray Mabus plans to take action to increase female recruitment.

According to the SECNAV, women currently make up approximately 18% of Navy personnel and only 8% of Marine Corps personnel. Mabus said that he didn’t have a specific number in mind, but that these percentages were too low.

There are approximately 200,000 women currently serving in the entire active duty military. At that number, women make up about 15% of the total force. Since 2001, more than 280,000 women have deployed in support of the wars in Iraq and Afghanistan.

Mabus spoke of the importance of having a diverse force as the reason for bringing more women to the service when he said, “The more diverse input you have into something, the better the organization is.”

The SECNAV said that the Department of the Navy is developing a series of measures, some that it can adopt on its own, and some that would require congressional approval.

Mabus indirectly cited his desire to increase female recruitment for the implementation of unisex enlisted uniforms. For years, female sailors wore a separate dress uniform from the male sailors’ iconic dress blue uniform, commonly referred to as “cracker jacks.” Females used to wear a blouse and blazer instead of cracker jacks. Female sailors were also required to wear separate headgear than males, for both their dress white and dress blue uniforms. Women had to buy and maintain a more expensive, heavier and less comfortable combination cover, instead of the men’s traditional white cap.

Many traditionalists have criticized the uniform change, saying that the Navy was putting women in men’s uniforms. But the SECNAV defended the move when he said:

“We”re not moving to put women in men”s uniforms. We”re moving to the term ‘uniform’,” Mabus said. “We don”t want to segregate women or anybody else in any way in the military.”

Based on a January, 2013 decision by then-Defense Secretary Leon Panetta, each branch of the U.S. Military has until January 2016 to assess which jobs are open to women to allow them to serve in combat.

So far, around 80,000 of an estimated 250,000 additional jobs have already been opened to women as result of Panetta’s order.

Women interested in careers in the U.S. Navy or Marine Corps should follow the respective links from the MilitaryConnection.com homepage.