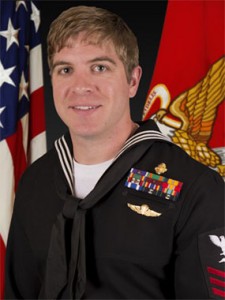 The Silver Star is the third-highest military combat decoration that can be awarded to a member of the United States Armed Forces, and is awarded for gallantry in action. Navy Petty Officer 1st Class Kevin D. Baskin was gallant and brave, and is now being awarded the Silver Star.

In 2013 during a deployment, Baskin and his team came under fire in Kushe village. The special amphibious reconnaissance corpsman, assigned to 3rd Marine Special Operations Battalion, saved the life of four members of his team by running through enemy fire to stabilize and evacuate his wounded team members. This act of heroism and bravery was performed in spite of Baskin being shot in the back.

Baskin’s award citation reads, “Although wounded, he continued treating casualties while refusing medical treatment for his own injuries. Under intense fire, while simultaneously directing the evacuation of the wounded Marines, partner forces and himself, he laid down suppressive fire until every team member had evacuated the kill zone. His actions ultimately saved the lives of four of his teammates.”

After recruit training in Great Lakes, Illinois at the Navy’s Recruit Training Command, Baskin attended medical training at Field Medical Training Battalion West at Camp Pendleton, California. Baskin said he knew he wanted to serve with the Marines, and was soon selected for the special amphibious reconnaissance corpsman-training program.

His first deployment to Afghanistan came after Baskin was assigned to the 2nd Marine Special Operations Battalion. The tour only lasted five months, due to a fragmentation from a rocket-propelled grenade that pierced Baskin. He was medically evacuated to the U.S. Naval Hospital in Bethesda, Maryland, where he spent eight months working and healing from his wounds.

Baskin’s desire to get back into battle took him from Maryland to a six month long Amphibious Reconnaissance Independent Duty Corpsman course, and back to Afghanistan with the 2nd MSOB.

On April 25,2013, at one of their checkpoints, the team started taking fire from two separate groups had been closing in on them. The rate of fire increased, leaving the team pinned down behind a cemetery wall. One teammate ran to them with a 60mm Mortar and started firing down the range. The brave teammate ran to another wall 50 meters in front of his team when he had no ammunition left.  He was shot when he tried to suppress the enemy. Baskin ran to his teammate and provided the aid needed to save his life, even after he, too, was shot.

Major Gen. Joseph L. Osterman, commander, U.S. Marine Corps Forces, Special Operations Command, presented Baskin with the medal, praising his character: “[Baskin] went forward without thought of himself, to the point of protecting his fellow Marines with his own body. From a personal perspective, I appreciate who he is as a man, from how he takes care of his family to the quiet professional that he epitomizes.”

Baskin accepted the award, saying he was proud but he felt like he was,  “just doing my job … what anyone else on the team would have done if put into the situation. It’s a very surreal feeling.”

We are proud to honor servicemen like Navy Petty Officer 1st Class Kevin D. Baskin here at MilitaryConnection.com and would like to thank Petty Officer Baskin for his service and commitment.