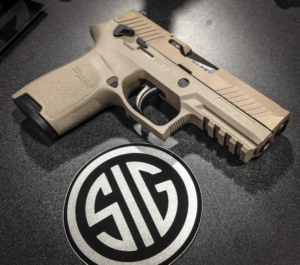 The M16 has been standard issue in the U.S. Army since the Vietnam War. Since then, the design has been updated and a shorter version, called the M4, entered Army service in 1997. The Army has been looking to swap out the M4/M16 rifle platform, especially given its sensitivity to dust and sand, and its tendency to malfunction when used in rugged conditions.

The M17, to be used by the Army,  Air Force, Navy, and Marine Corps, is made by Sig Sauer, and was picked to improve  accuracy and ergonomics. It’s compatible with a silencer, has interchangeable grips, and standard or extended-capacity magazines.

The Army is also looking at a number of upgrades to the weapons and ammunition currently carried by its soldiers. Army researchers are evaluating new designs for bullets and casings. They are also looking at new materials for rounds and propellants.

Currently, Soldiers conduct combat operations from tanks such as the Stryker, the Bradley and the Abrams. But the Army is trying to figure out what will take Soldiers to the fight of the future.

The Maneuver Center of Excellence out of Fort Benning provisionally stood up a cross-functional team focused on the development of the Army’s Next Generation of Combat Vehicles (NGCV).

The NGCV is expected to increase overall lethality, tactical mobility, strategic deployability and protection for Soldiers. It is also expected to reduce logistical demands on the Army.