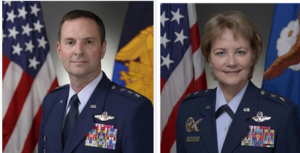 Two Air Force generals have been nominated to fill the top positions for the National Guard and Air Force Reserve.

Lt. Gen. Joseph Lengyel is slated to be the next chief of the National Guard Bureau, and Maj. Gen. Maryanne Miller the next leader of the Air Force Reserve.

If confirmed, Lengyel would receive a fourth star to take over for Army Gen. Frank Grass.

“Over the course of more than three decades in the United States Air Force, whether in the cockpit of an F-16 or serving as a defense attaché overseas, Lt. Gen Lengyel has demonstrated strong and steady leadership,” Secretary of Defense Ash Carter said in a statement.

Lengyel joined the Air Force in 1981, and has served in both the active and reserve components. He has more than 3,000 flight hours, mostly in the F-16.

Lengyel has served as the vice chief of the National Guard Bureau since 2012. Prior to that, he served as the Senior United States Defense Official; Chief, Office of Military Cooperation; and Defense Attaché, Cairo, United States Central Command, Cairo, Egypt.

Maj. Gen. Maryanne Miller is currently serving as the deputy chief of the Air Force Reserve. If confirmed by the Senate, she would pin on a third star and succeed Lt. Gen. James Jackson.

She has served as the deputy chief of the Air Force Reserve since 2013.