You are here: Home1 / Linked-In 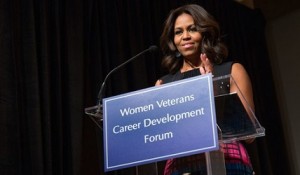 There is great news on the way for Veterans who are looking for post-military careers. The Department of Veterans Affairs (VA) has announced a partnership with online education site Coursera to help Veterans get hired.

First Lady Michelle Obama recently announced the partnership during a women Veterans career development forum held at the Women in Military Service for America Memorial at Arlington National Cemetery, just before Veterans Day. Mrs. Obama said that the joint venture is part of the administration’s efforts to help Veterans finding meaningful and lasting employment after separating from the military.

“It’s about making your transition to a fulfilling and wonderful civilian career as seamless as possible,” Mrs. Obama said. “Because we know that leaving the military can feel like you’re stepping into a whole new world.  And in the past few years, too many veterans have struggled during these crucial few months right after you hang up that uniform.”

As part of the partnership between the VA and Coursera, all Veterans will be eligible for a free certificate for select courses on www.Coursera.org. The free courses will be offered in a range of fields, including cybersecurity, health care, entrepreneurship, and data science, to name a few.

After completing a course on Coursera, Veterans will be able to upload the certificate of completion to the mega online job networking site LinkedIn, which will also be offering a free one-year premium subscription, waiving the regular price of $360 a year. The subscription will allow Veterans to appear as featured job applicants to potential employers, and will allow them to access training materials tailored for those who served in the military. They will also be able to contact anyone on the network.

LinkedIn will also be integrated with the VA’s online database system called Veterans Employment Center (VEC). Veterans will be able to upload their VEC profile to LinkedIn, as well as access resources specifically for Veterans.

The VA and Coursera will also work together to launch 20 “learning hubs” around the country. These will be brick and mortar centers that would offer online access and support for Veterans on the job hunt.

It is great to see so many measures, initiatives and partnerships forming to combat Veteran unemployment. And with the further education and promotion of Veterans, the rate of under-employed Veterans should be reduced as well.