You are here: Home1 / kevlar 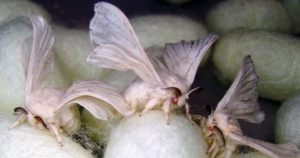 Although it may sound like something right out of Game of Thrones, the U.S. Army is testing a product called “Dragon Silk” for potential use in ballistic vests for soldiers, according to the product’s manufacturer.

Based in Ann Arbor, Michigan, Kraig Biocraft Laboratories Inc.  was recently awarded a contract that could potentially be worth $1 million to “deliver ballistic shoot packs constructed from its proprietary Dragon Silk material for performance testing,” according to a company press release.

The product is made from silkworms who have been genetically modified with spider DNA to weave stronger silk. Spiders spin incredibly strong silk — an order of magnitude stronger than that of silkworms.

“Dragon Silk scores very highly in tensile strength and elasticity, which makes it one of the toughest fibers known to man and the ideal material for many applications,” Jon Rice, the company’s chief operating officer, said in the release.

“Providing material for this ballistic shoot pack initiative is an important next step for Kraig and spider silk,” he added. “This contract reinforces the many significant potential applications for recombinant spider silk.”

“We’re proud to be working with the Department of Defense to assess the exciting potential of spider silk for military applications,” stated Kim K Thompson, CEO and founder of Kraig Biocraft Laboratories. “We are honored that the U.S. Army has selected us for this program. This effort will provide Kraig Labs with the opportunity to validate our longstanding belief that spider silk technology has had an incredible potential for protective and lifesaving materials and expand our ability to design and engineer innovative materials solutions.”

In recent years, the Pentagon awarded contracts to develop blast-resistant underwear featuring silk and Kevlar-like material to prevent genital-related. Between 2001 and 2013, there were 1,378 male service members who incurred injuries to the genitals and other parts of the genitourinary tract while serving in Iraq and Afghanistan.