You are here: Home1 / Johnny Bobbitt 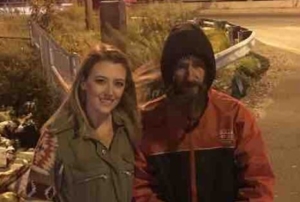 The night that Kate McClure ran out of gas could have been a really awful night. Instead, it became a lesson is generosity, kindness, and selflessness.

“My heart was beating out of my chest. I didn’t know what the heck to do,” said McClure.

She called her boyfriend, Mark D’Amico, who told her that he would come and get her.

Johnny Bobbitt, a 34-year-old homeless veteran witnessed Kate’s misfortune. He told her to get back in the car and lock the doors. A few minutes later, the former Marine returned with a red gas can, paid for with his last $20.

Wanting to repay him for his kindness, she provided Bobbitt with a few things to help keep him warm. She also started a GoFundMe page to share the story and raise funds for him. Hoping to raise $10,000 to help Bobbitt get into an apartment, as of this writing, the GoFundMe account stands at over $394K, with more than 14,000 contributors.

Change of plans: instead of an apartment, Bobbitt will get a home of his own. He will also purchase the truck he’s always wanted… a 1999 Ford Ranger.

In order to protect the funds, two trusts will be set up in his name, one that will pay him a living allowance for each year, and a retirement trust that will be carefully invested by a financial planner. Bobbitt will also have a bank account for every day needs.

Bobbitt wants to pay this good fortune forward, and will be donating to a few organizations and people who have helped him get through this rough patch in his life.

On the GoFundMe page, McClure wrote, “I wish that I could do more for this selfless man, who went out of his way just to help me that day. He is such a great guy, and talking to him each time I see him makes me want to help him more and more.”

If you have a story of helping a veteran, we invite you to share it with us. If you don’t, it’s never too late to write one.