You are here: Home1 / intelligence gathering 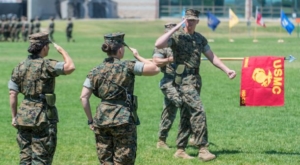 On July 6th, a new command known as the 1st Marine Expeditionary Force’s (I MEF) Information Group made history at Camp Pendleton by becoming the first of its kind among the Corps’ Marine expeditionary forces.

“It’s a centerpiece of some of the changes the commandant wants us to make in our support to warfighting,” said Col. Roberta L. “Bobbi” Shea.

The command is skilled in cyber, electronic warfare and intelligence, all critical needs as the service looks to build capacity to conduct information warfare at all.

“In the past, the group’s primary mission has been moving and supporting Marines as they go forward to command forces in theater,” Shea said.

Col. Shea handed over command of the newly designated I MEF Information Group to Col. Dawn Alonso, who most recently served at Central Command.

Marines trained in intelligence gathering and electronic warfare in closer contact with commanders and troops on the ground to degrade the enemy’s ability to exploit the information environment, capitalizing on social media and defending the country’s abilities against cyber vulnerabilities.

Shea pointed to such examples as the use of drones, law enforcement Marines picking up fingerprints or exploiting found cellphones on the battlefield, and imagery analysts gathering information from satellites.

Among the changes that are part of the transition are new Marine personnel, increased intelligence and cyberspace training, and a move to new facilities on the base.

While military officials called the re-designation a first at the Marine Expeditionary Force level, an increased focus on new technology and cyber warfare threats are among the Corps’ broader changes, mandated by the Marine Corps Commandant to “modernize the force.”

The re-designation is the first among the Marine Corps’ three MEFs, with I MEF at Camp Pendleton, II MEF at Camp Lejeune, N.C., and III MEF based in Okinawa, Japan.