You are here: Home1 / inappropriate behavior 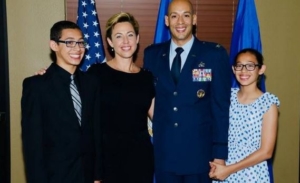 It was supposed to be a two-day retreat to Monterey, a chance for a small group of employees in UC Davis’ agriculture college to bond. Instead, it ended tragically for a decorated Air Force veteran.

Now a lawsuit filed on behalf of the widow and two children of Col. Christopher de los Santos alleges that the university’s actions against Santos, less than four months after he began working at the school, caused him to end his life.

Santos was the focus of an internal investigation into alleged inappropriate behavior during an alcohol-filled retreat with 16 of his co-workers. He supposedly stripped naked and invited subordinates to take a bath with him. The day after the investigation was launched, campus officials sent Santos an email placing him on leave, and ordered him to stay away from campus.

Santos took his own life a few hours after receiving that email.

According to the lawsuit, De Los Santos was subjected to exceptionally harsh punishment because he was a veteran, violating federal and state discrimination laws.

“They were concerned that he would show up with a gun and that he would have to be escorted off campus by security, and he said they made it clear that that was because he had a military background,” said Santos’ family attorney, Annabelle Roberts. “For them to have a knee-jerk reaction because in administrator in the Air Force might somehow be violent because he’s been in the military, I mean that’s blatant discrimination.”

Campus officials released a statement that read in part: “After the university received allegations of potential sexual harassment during an overnight staff retreat, he [Santos] was promptly placed on paid administrative leave so a thorough investigation could occur.”

The statement went on to say that the other employees who attended the retreat and also engaged in improper conduct received appropriate disciplinary action.