You are here: Home1 / Illegal Immigrants 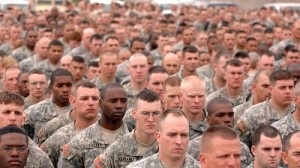 The DOD recently announced a policy that will allow illegal immigrants to join the U.S. Military. The DOD is expanding its Military Accessions Vital to National Interest (MAVNI). This will give recruiters the ability to target foreign nationals with high-demand skills to serve as full-fledged members of the armed forces. The high-demand skills consist of rare or in-demand foreign language expertise, as well as specialized health care training.

Previously, MAVNI was only open to legal non-U.S. citizens. Applicants were required to have been in the U.S. legally for a minimum of two years, have a high school education, achieve qualifying scores on a military entrance examination, and successfully pass a proficiency test for the vital language or skill that they possess.

Participation in the MAVNI program has been used as a fast-track to legal U.S. citizenship for thousands of immigrants.

It has been estimated that as many as 2.1 million children, teenagers and adults living in the U.S. do not possess legal immigration status, but could still meet the criteria for joining the U.S. Military under the expanded MAVNI program. Using the Obama administration’s 2012 policy known as Deferred Action for Child Arrivals (DACA), immigrants without a proper visa may join the Military if they came to the U.S. with their parents before age 16, so long as they possess a skill that is considered vital by their branch of service.

To be cleared for the program, illegal immigrants will have to be granted DACA status. DACA status is granted by Homeland Security and includes a background check.

The expanded program is to be capped at 1,500 recruits per year. Under the expanded MAVNI program, recruiters are more likely to target immigrants with language skills critical to national security, such as Arabic, Chinese, Pashto or Persian,.

The U.S. Military recruits around 5,000 non-citizens each year. Most of them are permanent U.S. residents. In 2006, the DOD began accepting foreigners with non-permanent visas, such as students or tourists, if they had special skills that are highly valued.

Since 2001, more than 92,000 foreign-born service members have become U.S. citizens while serving in the military.