You are here: Home / higher education for veterans 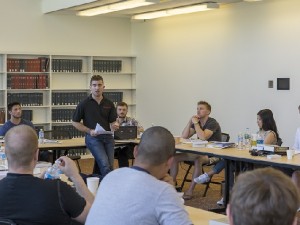 Military veterans have more life experience and maturity than the average traditional-aged college student. With that said, they can still benefit from extra guidance as they make the transition to a residential college environment often designed for 18-year-olds

Non-profit Warrior-Scholar Project (WSP) is an academic boot camp aimed at veterans who plan on attending or transferring to a 4-year college. Funded by foundations and private donors, the one and two-week programs are immersive and demanding. Veterans run the sessions, which are taught by university professors and graduate students. The curriculum is designed to help participants prepare to tackle the reading lists of rigorous college courses.

The project began at Yale in 2012 with 9 participants. Since then, the boot camps have spread, first to Harvard University and then to the University of Michigan, Vassar, UNC Chapel Hill, Syracuse, Cornell, Georgetown, U of OK, U of So. CA, and U of Chicago.

The application requests information about the prospective students’ military experience, academic background and plans for college, and includes a series of short essay questions.

WSP is now accepting applications for its 2016 academic boot camps. The programs are open to enlisted veterans and transitioning current service members who plan to enroll in or transfer into a four-year undergraduate program. With the exception of transportation, WSP’s generous donors cover all program costs for accepted students. If you would like to apply online, click here. Applications will be accepted until March 14, 2016, and all students will receive responses by early April, 2016. Course dates and locations will be determined by January, 2016.