You are here: Home1 / Guantanamo Bay

In spite of the National Defense Authorization Act limitations, especially the provisions designed to block Obama from moving some detainees to federal prisons, the president is expected to sign to sign the bill.

White House spokesman Josh Earnest said there are too many important provisions in the defense bill for another veto.

“I would expect that you would see the president sign the NDAA when it comes to his desk,” he told a news briefing.

The annual defense policy bill has passed each year for more than half a century and is one of the few bipartisan achievements of the current Congress.

Among the changes: the bill updates the military retirement system; establishes a new 401(k)-style retirement benefit for all service members; adds a number of reforms to the Pentagon’s acquisition system; strips substantial authority for acquiring new weapons from Pentagon leaders, authorizing the military branches to oversee their own programs; imposes new restrictions on transfers to third countries, including Libya, Syria, Yemen and Somalia.

Congress must pass the remaining 11 appropriations bills, or a larger omnibus agreement, by December 11th , when a temporary spending measure expires. Despite the budget accord, the Senate Democratic leader, Harry Reid of Nevada, warned that a government shutdown was still possible, but said there had been progress toward a larger accord on appropriations. 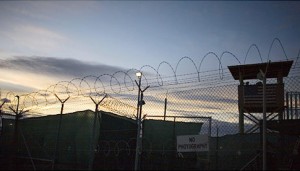 The U.S. Navy is investigating a complaint that could result in the evacuation of civilian and military lawyers from parts of Guantanamo Bay base in Cuba. The complaint comes on the heels of reports the war court compound at the remote base was linked to seven cases of cancer.

The complaint was filed last month by a Navy Reserves attorney who had previously worked on a Guantanamo war court case. The complaint listed the names of seven people, both military and civilian, but not all lawyers, who had had worked at the war court compound and been diagnosed with cancer in recent years.

The issue has been causing anxiety among lawyers who work with the war-on-terror detainees kept in prison at Guantanamo Bay.

Nine individuals suffered from a range of cancers, including lymphoma, brain, appendix and colon. Three of those stricken with cancer, aged 35 to 52, have died in the past 13 months. Navy Lt. Cmdr. Bill Kuebler, a former Guantanamo lawyer, died of cancer on July 17. He was 44.

Attorneys who have worked at the crude compound rife with posted warnings against drinking the water have long been concerned about health conditions there. It is built atop an abandoned airstrip and includes buildings that were closed down before the Pentagon set up the detention center in 2002.

“We have been telling our chain of command for years that we don’t feel safe living and working in the temporary facilities the government has erected for military commissions,” said air force captain Michael Schwartz, a military defense lawyer who has worked on Guantanamo Bay for years.

A spokesperson for the Defense Department Inspector General’s office said the office could not confirm or deny any investigations or complaints. The Centers for Disease Control likewise refused to comment on whether it was involved in the case, and instead referred all questions to the Department of the Navy.