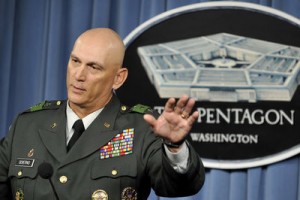 In a recent press conference, Gen. Ray Odierno, the Army chief of staff, projected that the fight against the Islamic State (ISIS or ISIL) will take much longer to resolve than  the White House has been publicizing.

“In my mind, ISIS is a ten to twenty year problem, it’s not a two years problem,” he told reporters. “Now, I don’t know what level it will be a problem, but it’s a long term problem.”

Odierno went on to explain that the movement is growing right now, and that it will take longer than originally thought. Previous reports from the White House estimated three to five years to eradicate ISIS. The militant group appears to be more extensive and has rooted in a greater geographic region.

The discussion arose from reporters inquiring about budget cuts. Odierno was commenting that with the current budget, the Army was simply not going to be able to do the things they are expected to do.

“To defeat them, is not just a military issue. It is an economic issue. It is a diplomatic issue. It is an issue of moderate versus extremists and it is about also, potentially, having the capability to root them out of the places they now hold in Iraq and Syria,” Odierno went on to explain.

In another interview, the chief of staff further explained that when ISIS took control in Mosul, the administration did not rely on his years of experience in command to strategize the plan of defense. Odierno also speculated that an additional compromise was the Army budget cuts over the past four years, decreasing the budget by nearly 14 percent.

Odierno agreed with the White House that the fight against ISIS is best to be handled by local forces on the ground.