You are here: Home1 / Fort Detrick 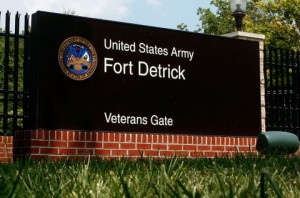 The area around Fort Detrick, in Frederick, Maryland, may be the site of a cancer cluster. The Army has denied over 100 claims seeking millions of dollars in reimbursement for cancer deaths and other serious illnesses at the Garrison. The illnesses were allegedly caused by chemicals buried and/or tested decades ago.

The claim denials pave the way for what will more than likely result in a federal lawsuit. Area B is 399-acre former waste-disposal site that was named one of the most polluted sites in the country in 2008 by the federal government when it was added to the Superfund list and given priority funding for cleanup efforts.

According to Lanessa Hill, spokeswoman for Fort Detrick, the U.S. Army Claims Service transmitted letters last month denying 106 out of 110 allegations filed.   There are four outstanding cases that have not yet been decided.  Two of these cases were filed by people arguing that they couldn’t sell their homes due to the fear of contamination. The remaining two are health claims that lack documentation, this according to Hill.

Thomas Jackson, an Army Claims Service attorney,  said the Claims Services denials were rooted in part on the lack of environmental regulations barring Fort Detrick from burying chemical waste in unlined pits decades ago. The government recently used a similar strategy to defeat a lawsuit declaring that Fort Detrick groundwater pollution reduced the development value of neighboring private property in the area.

In 2011, concerns raised by White’s group prompted an investigation by state public health officials. They found no significant evidence of cancer clusters within 2 miles of Fort Detrick.

Military Connection: Will there be a class action law suit at Fort Detrick?: By Debbie Gregory