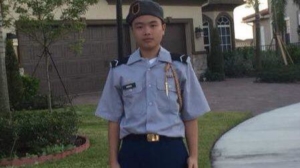 Peter Wang’s dream of attending West Point and serving in the U.S. military was tragically cut short when he was fatally shot during the massacre at Marjory Stoneman Douglas High School on Valentine’s Day.

In an act of heroism and selflessness, the young cadet died holding a classroom door open so his teachers and fellow students could escape the shooter.

Wang, who was a 15-year-old freshman, was wearing his U.S. Army Junior Reserve Officers’ Training Corps (JROTC) uniform when he was gunned down, was awarded the Medal of Heroism by the U.S. Army.  West Point posthumously admitted Wang to the school’s Class of 2025.

Two other JROTC members were also killed: 14-year-old Cadet Pvt. Alaina Petty, who was laid to rest on Monday in front of more than 1,500 mourners, and 13-year-old Cadet Pfc. Martin Duque, whose funeral is Saturday. They, too, have been awarded the Medal of Heroism.

The Army awards the Medal of Heroism to JROTC cadets who perform “acts of heroism.”

“The achievement must be an accomplishment so exceptional and outstanding that it clearly sets the individual apart from fellow students or from other persons in similar circumstances,” the Army said in a statement. “The performance must have involved the acceptance of danger and extraordinary responsibilities, exemplifying praiseworthy fortitude and courage.”

Florida’s governor, Rick Scott, directed the Florida National Guard to honor Wang, Petty, and Duque at their funerals. Petty’s medal was presented to her family at her service Monday morning. Duque’s family will receive the medal at his service on Saturday.

Wang was buried Tuesday in uniform, at his family’s request, and the JROTC Heroism Medal was on his uniform. A second medal was given to the family as a keepsake.

The funeral procession was escorted to Wang’s final resting place at Star of David Memorial Gardens Cemetery and Funeral Chapel by Patriot Guard motorcycle riders and members of the American Legion.

The following was posted on West Point’s Facebook page:

“One of West Point’s priorities is to develop leaders of character who are committed to the values of Duty, Honor, and Country. Peter Wang’s actions on February 14th are an example of those very principles and for this reason the academy honors his dream of being a West Point cadet with a 2025 letter of acceptance.

Posthumous admissions offers to West Point are given in rare instances.

The Broward County school system’s JROTC program boasts an average enrollment of 7,650 students annually across 28 of its 34 high schools.

I am thankful that we live in a nation that allows us free speech and to hold different points of view.  I rarely express my personal views, but in this case, I feel compelled to do so. It is the least that I can do to honor all of the victims of this tragedy and other massacres.

I am a mom, and my heart is so heavy for the parents who have experienced the unimaginable pain of losing of a child, especially in such a senseless manner.

My son’s wonderful girlfriend and one of my valued staff members, along with her boyfriend who recently transitioned from the military, literally ran for their lives in Las Vegas.   They survived, but are dealing with PTSD and survivor’s guilt, and may never be the same.

I respect our 2nd Amendment for citizens to bear arms for protection.  But it is not necessary for any person, other than law enforcement personnel and combat military to have automatic assault weapons and/or devices to automate weapons.  We must have strong legislation to regulate these types of weapons in order to try and prevent massacres such as those that occurred in Parkland, Las Vegas, Sandy Hook, etc.

Mental health is part of the issue, but without a doubt the main issue is automatic weapons.  There are many people with mental health issues that do not harm anyone.  There are people who are perceived to be normal who snap.   It is a lethal combination when disturbed people are able to have or easily obtain assault weapons and literally mow down innocent victims.     I do not understand why any reasonable person(s) would oppose controls on assault weapons.

It is a sad state of affairs when organizations such as the National Rifle Association (NRA) have power over state and federal elected officials to sway them from their sworn duty to protect the people they are supposed to serve.

Too many children and others have lost their lives and their childhoods.  The survivors have been changed forever.  They are the adults in the room now.

We must work together on both sides of the aisle and change things.  We need to put people before special interests and political pressure.  We need to protect our children.