You are here: Home1 / flight milestone 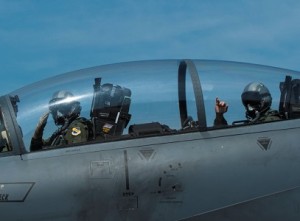 For Air Force Lt. Col. Paul Hibbard, a 333rd Fighter Squadron instructor pilot, the clouds are like a second home. Hibbard joined two other active-duty F-15E pilots in clocking more than 3,000 hours, the equivalent of more than four continuous months in the air.

His journey began in 1995, as an F-15 student, an experience Hibbard described as “exhilarating.”

“The simulator and ground briefs prepared us for all of the procedures we would execute, but nothing prepares you for the kick in the pants, the G-forces and the mind-racing visuals of a flight in an F-15E. Over time, I’ve grown accustomed to the physical demands, but the joys of dominating the aerial environment haven’t faded.”

Although Hibbard has deployed seven times and flown more than 1,550 sorties,he’s doesn’t get caught up in statistical credentials.

Nevertheless, upon landing from the sortie that took him over the 3,000 hour mark, Hibbard was joined by family and friends to celebrate his achievement. “My wife of 22 years has supported me the whole way (as well as) all the unsung Airmen doing their best to make this milestone possible,” said Hibbard.

As an instructor pilot, Hibbard said he plans to continue passing down his knowledge and expertise to all the younger pilots who come through his classroom.

During his long career with the U.S. Air Force, Hibbard had deployed to Royal Air Force Lakenheath, England; Mountain Home AFB, Idaho; and at Seymour Johnson AFB. He was also at the 90th FS at Joint Base Elmendorf-Richardson when F-15Es were deployed there.

“I can tell you the 3,000th hour didn’t feel very different from the 2,000th or 1,000th hour, but it feels a lot different from that first hour,” Hibbard said. “I look forward to being able to continue to fly the Strike Eagle for as long as the Air Force will allow me.”