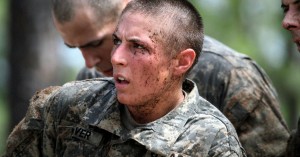 First Lt. Shaye Haver is one of the two women who have made history by making it through grueling Ranger School. Haver is an Apache helicopter pilot from Copperas Cove, Texas.

Ranger School is considered one of the military’s most difficult courses physically and mentally. Haver performed the same physical tests as the male students, including an initial requirement to complete 49 push-ups, 59 situps, six chin-ups and a five-mile run in no more than 40 minutes. The course included a 12-mile foot march in three hours, four days of military mountaineering and 27 days of mock combat patrols. In total, they hiked roughly the distance from New York City to Boston with heavy packs.

In addition to serving as an early step toward integrating women into combat, allowing female soldiers into Ranger School reflected a reality that women have been serving in dangerous front-line military jobs for years, like top gunners in Humvees and door gunners on helicopters in Iraq and Afghanistan. The service branches will make recommendations to Defense Secretary Ashton Carter this fall.

Haver and fellow graduate Kristen Greist will not be able to join the elite 75th Ranger Regiment unless the military’s top leaders open all combat roles to women.

Retiring Army Chief of Staff Gen. Raymond T. Odierno said that any soldier who remained in Ranger School – male or female – can meet the standards the service has established for a job and should be able to serve in it. Odierno expects the Army will start another Ranger School course in November, which it will again study to decide if the course will be open to women permanently.