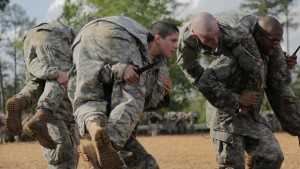 The August Ranger School graduating class was the first to include women graduates; two to be exact. The women earned not only their Ranger Tabs, but also the respect of their male classmates.

Capt. Kristen Griest and 1st Lt. Shaye Haver were two out of 19 women who enrolled in Ranger School, alongside 380 men. Of those male students, 94 graduated with Griest and Haver. On average, 40 percent of males successfully complete the course.

A third woman who started the class has opted to recycle through the Mountain Phase.

Male classmates may have been skeptical at the beginning of their first course, but it didn’t take long for the men to realize these women were capable, both physically and in determination.

During Mountain Phase, 2nd Lt. Michael Jankowski credited Haver as the one who stepped up when he needed help.

Jankowski said he found he was at a point where he had to turn to a teammate.

“I had a lot of weight on me, and I was struggling,” he recalled. “I stopped and asked if anyone could take some of this weight.”

The males in his platoon hesitated. “I got a lot of deer-in-the-headlight looks and guys were like ‘I can’t handle any more weight,'” he said. Haver offered to take some of Jankowski’s load.

“She was the only one who would volunteer to take that weight,” he said. “She took the weight off me, and carried it. … She literally saved me. I probably wouldn’t be sitting here right now. From that point there was no more skepticism.”

Spc. Christopher Carvalho offered a similar testimony during the Ranger Assessment (RAP) Phase week. Here, students carry a 47-pound rucksack along with other gear on the march.

“One particular incident that stood out in my mind was the 12-mile ruck march during RAP week,” he explained in a recent interview.

“These two women finished well ahead of some of the males,” he said. “Right there and then – that validated it for me that these women are here to stay. They are carrying the same weight we are, and they are doing the same stuff we are.”

“It’s pretty cool that they have accepted us,” Haver said. “We ourselves came to Ranger School skeptical, with our guards up, just in case there were haters and naysayers. But we didn’t come with a chip on our shoulder like we had anything to prove.

“Becoming one of the teammates — that we could be trusted just like everyone else — whether it was on patrol or to carry something heavy or whatever — it was that every single time we accomplished something it gave us an extra foothold in being part of a team.”

“My main concern in coming to Ranger School was I might not be able to carry as much weight or not be able to meet up to the same standard,” she said. “I tried to do as much as I could, and I saw everybody else helping each other out and you just try to be the best teammate that you can.” 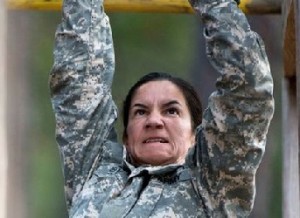