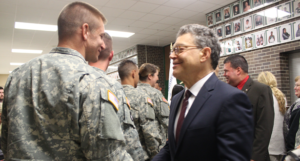 FEDERAL LAW AND REGULATIONS (AND SOME STATE LAWS) PROTECT ACTIVE DUTY, GUARD, AND RESERVE MILITARY PERSONNEL WHO ARE ATTENDING POST-SECONDARY EDUCATION SCHOOLS IF THEY HAVE TO MISS SCHOOL DUE TO MILITARY ORDERS.

The federal law and regulation has the greatest protective impact on a “Veteran” who is now attending school who is also in the Guard or Reserves. The only time the federal law would not directly protect a veteran is when they are not in any reserve or active duty military status. Knowing about the law, however, might encourage a person, veteran or not, to join the military in some capacity, knowing that many disruptions to one’s education due to military orders are now ameliorated to some degree.

The law and regulations accord the post-secondary education student whose education was interrupted by voluntary or involuntary military service the right to readmission to the educational program. These requirements apply to any educational institution that participates in title IV federal student financial aid programs, including Pell Grants, Stafford Loans, and the Federal Work-Study Program.

EXTRA NOTE FOR RESERVE AND GUARD PERSONNEL:  There may be instances where your active military service due to its short duration (or how mobilized for National Guard personnel) does not receive Federal education protection.  In those cases, check to see what laws your state government has on this as they often provide additional protections. Some states even give the service member the ability to sue the school for violating the state’s law. There are currently 21 states that have their own laws in this area:  Alabama, Arkansas, Colorado, Florida, Georgia, Hawaii, Illinois, Iowa, Louisiana, Minnesota, Mississippi, Missouri, New Jersey, New York, Pennsylvania, South Carolina, Tennessee, Texas, Washington, West Virginia, and Wisconsin

About Commandfer Johnson – Wayne Johnson holds a Bachelor of Science in Political Science from West Chester State College and a Juris Doctor, cum laude from Mercer College as well as a Master of Laws from Tulane University Law School. Wayne served I the Army from 1975 to 1979 and was a commissioned ensign in the Navy in 1982 advancing to Commander in 1996. He served as Senior Defense Counsel, Chief Legal Assistance Attorney, Navy Legal Service Office from 1983 to 1985 in Pensacola. He was a Staff Judge Advocate for the USS Canopus as well as a Military Law Instructor at the Naval Justice School.   Wayne retired in 1999 with 20 years of active military service. Since 2005, Wayne has been employed y the Department of Health and Human Service, Office of the General Counsel, Ethics Division, Washington, DC.