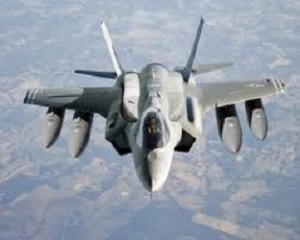 The U.S. military has invested a lot of money into its efforts to maintain dominance in air combat. An F-15 Eagle can cost up to $30 million, a single F-22 Raptor comes with a price tag of $150 million, and an F-35 Lighting ranges from $1.24 million to $1.56 million. But for all that money, there is a deplorable gap in the capability of our aircraft and resources to share data.

An effort is in the works to bring leaders from each of the DOD branches together with pioneers in industry and academia, in order to develop what is being called the “combat cloud,” a means to share data across aircraft, ships and satellites. The concept of the “combat cloud” is based on the idea of commercial clouds, commonly used to access and share data across different devices including smartphones, laptops, DVRs and other devices.

The “combat cloud” is still in the concept stage. The largest obstacle to the development of such a program mainly revolves around defending the system from intrusion. While it would be highly beneficial to have all of our air resources sharing and accessing data, there is the realistic threat that the data could be accessed by unfriendly units, or even worse, misinformation could be uploaded into the “combat cloud” by the enemy.

The ultimate success of implementing a usable “combat cloud” is likely to take a decade or so to be completed. The program is looking for a way to connect fighters, intelligence aircraft, satellites, ships and helicopters to form an overarching network of data that each platform could add to and access, even during missions.

Currently, the Navy is attempting to connect its forces via the Naval Integrated Fire Control Counter Air (Nifca) plan that networks its ships and aircraft to protect assets at sea from attack.

The Air Force’s fleet of aircraft was not designed to interconnect. Cut backs and programmatic delays mean F-22s and F-35s will be fighting alongside fourth-generation F-15’s and F-16’s beyond 2030.  The branch is trying to come up with the most effective way to link its multi-era fleet. The Air Force’s Electronic Systems Center at Hanscom AFB, MA is planning to release a request for information for industry for a gateway between their different era aircraft.

Many in the aviation community believe that a data sharing system of some sort is an easy fix and could be done in a matter of months. But with DOD cutbacks and the scaling down of other major projects, the “combat cloud” could take a back seat to other areas that desperately need funding. For now, Washington isn’t convinced that there are any unfriendly countries that pose a reasonable threat to the U.S. military’s dominance of the air.