You are here: Home1 / esgr award 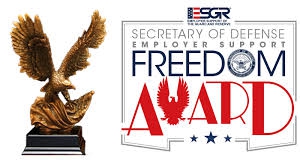 The Employer Support of the Guard and Reserve (ESGR), a Department of Defense office, has selected 30 employers and government organizations from 2,350 nominations for 2018 Secretary of Defense Freedom Award, commonly referred to as the “Freedom Award.”

Almost half of the U.S. military is made up of National Guard and Reserve members, many of whom also hold jobs with civilian employers. The Secretary of Defense Employer Support Freedom Award is the highest recognition given by the U.S. Government to employers for their support of their employees who serve in the Guard and Reserve.

ESGR organizes the annual award program. The award was instituted in 1996 by then Secretary of Defense William Perry, and has since presented the honor to hundreds of recipients.

ESGR received nominations for employers in all 50 states, Guam-CNMI, Puerto Rico, the U.S. Virgin Islands and the District of Columbia.

Ohio Department of Rehabilitation and Corrections

In 2008, ESGR launched a web site for the Freedom Award. Using videos, news articles, profiles of recipients, and tips about employer best practices, the site provides information about the support that employers across the nation provide to their Guard and Reserve employees and their families. The site also houses the nomination form for the award.