You are here: Home1 / emerging consciousness 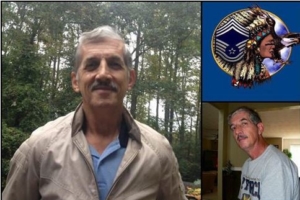 “My Father is retired Chief Msgt Roger Maynor, room 419A, he was transferred to your hospital on Friday Night from McGuire veterans hospital. We were told that he was here temporarily for a rehab treatment for 3 weeks and would then be transferred back to McGuire for further treatment. But this morning we are told that he is being sent to a nursing facility to basically just lay in a bed.”

Maynor, 63, retired from the Air Force after serving 30 years, including being stationed at Langley AFB. He was doing volunteer work in 2014 in a remote section of the Philippines when he fell from a ladder and sustained a major brain injury.

The family’s struggle to arrange Maynor’s care has involved two long years, thousands of miles, nearly $50,000 and a bureaucratic mess with the Veterans Administration.

Although Maynor has been comatose since the injury, daughter Teri Vick sadi, “We know he’s in there. We talked to him, he nodded his head at me.”

The cost of a special medical flight to get him back to the U.S. was $45,000. His family learned it was not covered by insurance. They appealed to lawmakers, the military, and the VA, but were denied any financial help. Maynor remained in the Philippines for two years.

Maynor’s family was finally able to raise the money for the flight and he was transported to Richmond McGuire Veterans Medical Center, a pioneer in the VA medical system for a brain injury therapy known as emerging consciousness.

Emerging consciousness therapy aims to keep the body as healthy as possible, so that the patients injured brain will be more receptive to stimulation.

However, after getting a discouraging prognosis, Richmond doctors told the family that Maynor had to be transferred to Hampton.

But following the Facebook post, doctors told the family that Maynor would be sent back to the Richmond VAMC to get the vital therapy.

Maynor’s family says they’re grateful that the VA is giving him a fighting chance.

“We’re not going to a nursing home,” Michelle Maynor said. “We brought him all this way. We paid all this money — for help. Not to be shoved under a rug and forgotten. That’s our fear – getting lost in the system. We’re not going to let that happen.

Daughter Teri gave a special shout out to our friends at Fisher House. She said, “The Fisher House has not only been an island in the storm, it’s been like finding a resort when all you needed was a bed and a shower. Maybe a little dignity if at all possible. We are eternally grateful for the hospitality offered by the Fisher House while we endure this long journey ahead. We feel just that much more human. I know that others have and will continue to receive this blessing.”

We second that, and send our best wishes to this family.