You are here: Home1 / DroneDefender 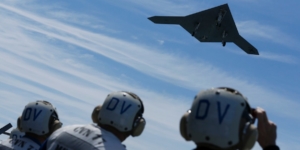 The head of the U.S. Air Force’s Air Combat Command wants permission to deal with civilian drones—including shooting them down

Gen. Mike Holmes, the head of Air Combat Command (ACC), is trying to remedy the problem of unmanned aerial systems (UASs) that are flown near a military airfield.

Holmes reported that back in July, there were two such incidents on the same day.

“At one base, the gate guard watched one fly over the top of the gate check, tracked it while it flew over the flight line for a little while, and then flew back out and left, and I have no authority given to me by the government to deal with that.”

In a second incident, an F-22 Raptor had a “near collision” with a small UAS. The ACC commander was left with few options.

Flying drones within five miles of a U.S. base without getting permission from that installation is already illegal, but actually taking action against them is a federal matter, and only federal civilian agencies can jam drones.

When a civil aircraft enters a restricted airspace, the military can make sure that the pilot faces consequences from the FAA, such as a fine or losing his or her license.

But that’s more difficult with small unmanned systems. While the espionage aspect is a given, there is always the threat of a terrorist or state-sponsored drone swarm attack crippling an air base.

“Imagine a world where somebody flies a couple hundred of those and flies one down the intake of all my F-22s with just a small weapon on it? I need the authorities to deal with that,” Holmes said.

If General Holmes has his way, Air Force security police may soon be carrying weapons such as the Battelle DroneDefender, which utilizes a non-kinetic solution to defend airspace against UASs without compromising safety or risking collateral damage.