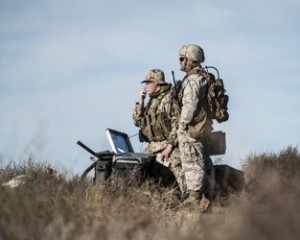 During a keynote address on international security and the future of defense strategy at the U.S. Army War College, Deputy Secretary of Defense Bob Work said, “In the future, U.S. Army and U.S. Marine forces and our allies who fight with us are going to have to fight on a battlefield that is swept by precision-guided munitions but also one that is swept by persistent and effective cyber and electronic warfare attacks.”

Mr. Work’s statement on April 8, 2015 is not a prediction, but a warning based on the continuation of the current evolution of warfare. In the past hundred years, this evolution has seen the following: the introduction of the first aircraft (World War I); the first all aerial battles (World War II); the use of long range missiles (Korean War); ground warfare sped up by the rapid delivery and extraction of personnel through use of helicopters (Vietnam War); the total combined surveillance, air cover, bombing, and air superiority that we see today using aircraft, satellites, and computers. In the last ten years, we have even witnessed the rise of the unmanned aerial vehicle (drones), including the X-47.

With the evolution of weapons and tactics, along with the need to fight enemies within close proximity to friendly civilians and cities, the future of warfare will see further developments in guided munitions and advanced weaponry. Ground forces will be faced with guided rockets, artillery, mortars and missiles that utilize laser guidance, infrared homing, and GPS capability.

In the future, ground combat will also have to contend with “informationalized warfare”– warfare that uses the combination of cyber, electronic warfare, information operations, and deception and denial to disrupt command and control, giving the enemy an advantage in the decision cycle.

In order to be successful in boots on the ground campaigns, U.S. forces will have to use a combination of informationalized warfare and guided munitions, in conjunction with existing traditional ground combat strategies.

The DOD announced the Defense Innovation Initiative in November, and new Defense Secretary Ash Carter has since expanded it. The initiative is intended to provide the framework and funding for new operational and organizational concepts, and the development of new technological capabilities.

Over the past hundred years, the U.S. military has established itself as the most innovative and technologically superior military in the world. It has become apparent that several other nations are catching up with our capabilities, even surpassing us in some. The department’s focus on innovation is about finding new ways to create organizational constructs, train, and fight in order to remain at the head of the evolution of warfare.

Military Connection: The Evolution of Warfare: By Debbie Gregory