You are here: Home1 / commissaries

One of the most daunting details of a college education is perhaps also the biggest blockade as well: the cost of school and the ability to afford tuition. Even local community schools often come with fees that are beyond the scope of a military family. Fortunately, Fisher House Foundation and select companies make scholarships earmarked for Military children possible.
Over the past 17 years, the Fisher House Foundation has administered scholarship grants to nearly 11,000 students. These grants are courtesy of the Defense Commissary Agency and its business partners. Fisher House Foundation has volunteered to award and administer the funds, ensuring that every penny raised is awarded to a deserving recipient.
The nearly 11,000 students over the years have been selected from over 90,000 applicants. Potential applicants are eligible if they are the child of an active duty servicemember, reservist, guard or a retired commissary customer.  All eligible applicants should also have a minimum cumulative GPA of 3.0 (on a 4.0 scale) and be enrolled or enrolling in a 2- or 4-year degree program for the upcoming fall. Applications are currently being accepted for the Fall 2019 Semester.
Do you have a college student or graduating senior? The 2019 program application is currently available. Applications must be submitted online by February 15th.
Applicants will be reviewed by Scholarship Managers, a scholarship management firm. This professional firm contracts with Fisher House Foundation. All applicants are evaluated and the most qualified of the group are awarded. 500 Grants will be awarded for the 2019-2020 Academic year. Each grant will be $2,000. To ensure that all funds raised are awarded as scholarship grants, Fisher House Foundation does not charge for its services and covers the cost of the scholarship management contract.
The entirety of the program is funded by Commissary business partners. It is through the extreme generosity that the scholarship fund is even possible. Manufacturers and suppliers keep products on shelves at Commissaries worldwide and the purchase of those products fund the Scholarships for Military Children program.
For more information regarding the scholarship program, application instructions and sponsor information, please visit https://militaryscholar.org/sfmc/index.html.
Per the Fisher House Foundation website and corresponding press releases regarding the Scholarships for Military Children program:
The Defense Commissary Agency and Fisher House Foundation gratefully acknowledge the support and monetary donations of all contributors and especially the following business partners for the 2018 scholarship program:
Four Star Donors – $50,000 or greater
Fisher House Foundation
Reynolds Consumer Products
Three Star Donors – $25,000 to $49,999
522 Foundation
Kahlert Foundation, Inc.
Kellogg’s
MDV, A SpartanNash Company
Procter & Gamble
Two Star Donors – $10,000 to $24,999
Dial, a Henkel Company
Ferrara Candy Company
Frank and Joanna Hogan
J.M. Smucker Company
Kimberly-Clark Corporation
Red Bull
One Star Donors – $2,000 to $9,999
American Logistics Association – Hampton Roads Chapter
Association of US Army – MG Greene Chapter
Bath Fitter
Commander William S. Stuhr Scholarship Fund
Dr Pepper Snapple Group
Elite Brands
Energizer
In Honor of MSgt. Loyd J. Rockhold, USMC
Mars Wrigley
Lt. Col. Ron Mattana Scholarship Fund
Pepperidge Farm
PepsiCo
PepsiCo “In Memory of Murry Greenwald”
Pharmavite
Pride Industries
SC Johnson, A Family Company
The Hershey Company
Unilever William and Helen Sherman
Supporting Brokers & Distributors Representatives
Acosta Sales & Marketing
Advantage Sales & Marketing
American Logistics Association
Coastal Pacific Food Distributors
Dunham & Smith Agencies
Exchange & Commissary News
Favata Bakery, Inc.
Military Media Inc.
Military Deli & Bakery Services, Inc.
Military Times / Sightline Media Group
Northeast Military Sales
Overseas Service Corp. / Webco Services Co
Sodexo 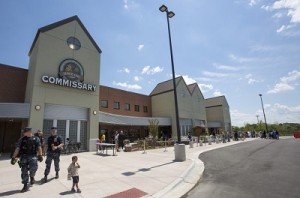 As the economy struggles to rebound,  there are many government programs that will need to be trimmed down *****or***** eliminated completely. The defense department’s budget is not exempted from the reductions, and neither are the programs that affect the members of the DOD and their families.

But military families recently dodged a bullet, after the Senate budget panel voted to restore $200 million in cuts from commissaries.

Base commissaries are essentially supermarkets. The program is run by the Defense Commissary Agency (DeCA), which falls under the DOD. Commissaries sell basic food and household goods, most of which can also be found at the Base Exchange (which is more like a Wal-Mart). Commissaries are different from exchanges in that  they try to offer the same products to service members and military families, no matter where they are in the world, at a subsidized price.

While civilians who are unfamiliar with commissaries may see the program as a handout, most military families see commissaries as part of their income, and one of the benefits that caused them to jointhe military. Service members don’t make much in the way of base pay. In order to make ends meet, most military families rely on the other military benefits, including Base Allowance for Housing (BAH), subsidized on-base gas stations, military banking centers, base exchanges and commissaries. The DeCA estimates that the average military family saves more than $4,000 per year by shopping at the commissary.

It takes an estimated $1.4 billion each year to operate 178 commissaries located within the U.S. and the additional 67 commissaries located overseas. Last year, there were talks of eliminating commissaries completely. The Senate budget panel recently voted on whether *****or***** not to cut $200 million from the program, which the DeCA estimates would have cost military families approximately $1,500 per year in higher prices.

The commissary has not been saved for good. The panel only agreed to put off cuts for one year.

Civilians might question why service members don’t just do their shopping in town. But service members and their families sacrifice so much, and in reality, earn so little, that these benefits are not perks, they are necessities. Saving money by shopping at the commissary helps military familiesafford a better life… one that they have truly sacrificed for and deserve.