You are here: Home1 / Choice Plan 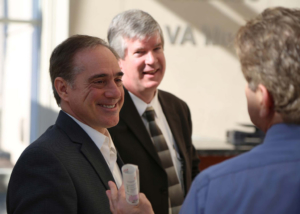 Shulkin intends to test new screening criteria over the next several months. One “model” under consideration is to give Veterans with service-connected injuries or ailments priority to use Choice over Veterans seeking care for conditions unrelated to service.

“He’s looking at Service-Connected Disabled Veterans to be given this option first because he thinks the American public looks at those Veterans as being most worthy of getting the best treatment possible,” said one executive of a major veteran organization who Shulkin had briefed on tentative Choice reform plans.

Shulkin, a physician who previously served as VA’s top health official in the Obama administration, says Congress must hurry to extend the Choice Plan beyond its August 7th expiration date, or the VA will lose nearly $1 billion leftover in that account.

Shulkin told Veteran groups that he would prefer that Choice stay free to all patients. But if co-pays are needed to contain costs, they might be applied based on whether Veterans have Service-Connected conditions.

He acknowledged that an average of 20 Veterans a day take their own lives, and 14 of the 20 are not enrolled in VA Health Care. Many are combat Veterans denied VA access because of the character of their discharge. Some received the “bad paper” because of misconduct due to Post Traumatic Stress or Traumatic Brain Injurywhich perhaps their service branch failed to diagnose or to recognize. But Shulkin confirmed that the VA will grant access to urgent mental healthcare to otherwise ineligible Veterans, those who received other-than-honorable discharges.

“I believe we are going to save money by not institutionalizing people when family members decide they can no longer provide care,” Shulkin said.

Shulkin also said that in regards to service dogs for Veterans suffering from Post Traumatic Stress who feel that a canine companion would help their recovery, he won’t wait for findings of ongoing study to support this theory.

“It will be another three years before we obtain the results and I’m not willing to wait, because there are people out there today suffering,” Shulkin said.