You are here: Home1 / Choice and Accountability Act

TriWest Healthcare Alliance and Health Net Federal Services, the companies charged with administering private health care options for veterans, are both under investigation for over-billing the government by tens of millions of dollars.

The Veterans Access, Choice and Accountability Act, expected to cost taxpayers $10 billion has come in closer to $12 billion to date, and that between the two companies, they have collected at least $89 million more than what they were supposed to.

The VA Choice program was launched during a very rough time for the VA Health System, when allegations of misuse, misconduct, claim backlogs and long wait times for veterans seeking treatment at its facilities were every day occurrences. It was created as an emergency stopgap to serve patients who were waiting weeks or months to see doctors in a backlogged VA healthcare system.

To alleviate part of the problem,  if the VA is unable to schedule an appointment for a veteran within a month, or if a veteran lives more than 40 miles from one of its clinics, they can access a network of private clinicians and hospitals managed by TriWest and Health Net.

An audit revealed that both companies billed the VA for more than what they paid medical providers, charged different rates other than what was contractually set up, submitted duplicate bills for the same services, and billed for medical services already covered by private health insurance.

TriWest maintains they have done no wrong, blaming the VA’s billing system for the overpayments. But this isn’t the first time TriWest has been investigated for mismanaging government funds. In 2011, the company paid the Justice Department $10 million to settle a lawsuit that the company systematically defrauded the government.

Both TriWest and Health Net’s current contracts will run for the next 10 months. 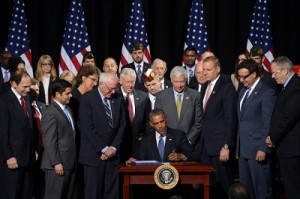 On Thursday August 7, 2014, President Obama signed the Veterans Access, Choice and Accountability Act of 2014 into law. The legislation, commonly referred to as the VA reform bill, is intended to give the U.S. Department of Veterans Affairs (VA) the necessary funding and resources to improve the access to, and the quality of, care for Veterans.

The highly publicized legislation passed in the House on Wednesday, July 30th , and in the Senate the following evening.

Included in the bill are the means to expand survivor benefits and educational opportunities. It also contains provisions to improve care for victims of sexual assault and Veterans struggling with traumatic brain injuries.

In total, $16.3 billion has been allotted to expand the following programs and benefits for Veterans:

Ensuring that the VA healthcare system has the resources it needs: Earmarked $5 billion will allow the VA to hire more doctors and more nurses to staff more clinics. As Iraq and Afghanistan Veterans transition into civilian life, the VA system needs to keep pace with the increased demand and patient population. The bill also allots $1.3 billion more to finance 27 new VA facilities across the country.

Providing timely care: For Veterans who haven’t received timely care through the VA system, this bill will help them get the care they need through private healthcare providers. This is particularly important for Veterans living in remote areas. Under the signed legislation, Veterans who live more than 40 miles from a VA facility will be able to seek treatment outside the VA system. This allowance would also apply to Veterans who are unable to receive an appointment in a reasonable amount of time.

Accountability of VA employees: The measure grants the VA secretary the authority to remove senior executives who fail to meet the standards of conduct and competence that their position within the department requires. Specifically, the legislation facilitates the firing of employees who engage in an unethical practice, such as conspiring to cover up a serious problem.

In-state tuition for all Veteran students: Another section of the legislation calls for public schools that don’t offer the in-state tuition rate to Veterans and Veteran dependents, using education benefits, to lose access to all GI Bill tuition students. While not mandating that colleges and universities charge the in-state price, the provision makes it in the schools’ best interest to offer Veterans the lower tuition rate.