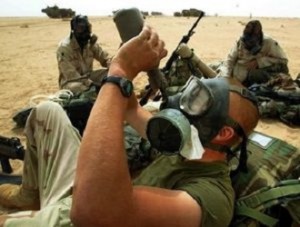 Late in October, the Defense Department announced that it will provide medical examinations and long-term health monitoring to service members who were exposed to chemical warfare agents in Iraq.

Over the last several years, an increasing number of Iraq Veterans have come forward with health complaints as a result of exposure and inadequate treatment. To date, neither the Pentagon, nor any of the service branches have released a full list of chemical weapons recoveries and exposures.

A review ordered by Defense Secretary Chuck Hagel found that the military did not follow its own healthcare protocol during the initial care of many patients, and did not establish a means for following the exposed patients’ health over time, as the guidelines required.

Medical officials from the Army said that in the early months of 2015, the military will begin conducting medical exams for soldiers exposed to chemical agents. It is estimated that approximately 25 members from the Army and the Navy have been affected by chemical agents due to their service in Iraq.

Previously, the events involving their exposure to the chemical agents had been kept under wraps. Nearly all of the incidents of exposure involved the discovery or demolition of stockpiles of rusted and corroded ordinance. Missiles and bombs, some utilizing mustard gas and other chemical agents, were hidden by Saddam Hussein’s regime in Iraq, and found by U.S. forces. There was a fear that insurgent groups in Iraq would look for and discover more hidden stockpiles of chemical weapons.

The discovery and acknowledgement of the exposures may be late, but going forward, it will help these Veterans apply for benefits through the Department of Veterans Affairs. By acknowledging the exposure, the Veterans will be able to link their current health problems to their service, making it easier to get approved for disability benefits and medical treatment.

Military Connection: Iraq Vets To Get Relief: By Debbie Gregory