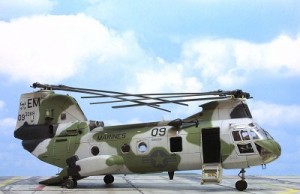 Since 1962, the CH-46 Sea Knight helicopter has been a mainstay of the U.S. Military. The dependable helo, favored by the Navy and the Marine Corps, is being retired.

The helicopter, with its twin-turbine engine and tandem counter-rotating rotors was easily recognizable. In the mid-1960’s, some pilots began referring to CH-46 as Frogs or Phrogs. There are different versions of the story as to the origins of the nickname that have circulated through the Navy and the Marine Corps. One version says it’s due to the way the Sea Knight’s rear sits lower that the front while on deck. Others claim it’s because the helicopter looks like a frog about to hop. Many CH-46 pilots have proudly called themselves “Phrog Flyers.”

The Navy used the CH-46 for a variety of operations, including patrolling, providing ship-to-ship transportation, vertical replenishment, observation, and search and rescue. The Navy used Sea Knights as their standard medium-lift utility helicopter for forty years, until switching to the MH-60 Seahawk in the 1990’s

The Marine Corps has continued to utilize the CH-46 through 2014. The vision of an inbound CH-46 was a welcome sight to a Marine in need of supplies, ammunition or reinforcements. Sea Knight squadrons took part in the 2003 invasion of Iraq.

The Marine Corps intends to replace the CH-46 with the tilt-rotor aircraft, V-22 Osprey. The last deployment of the Sea Knight was a mission of Medium Helicopter Squadron 364 to support the “Partnership of the Americas” in Chile.

Many Veterans, from the Vietnam era through Marines serving today will remember the CH-46 Sea Knight, and its contribution to their efforts.