You are here: Home1 / Casey Owens 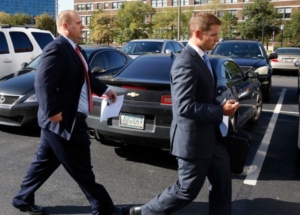 An attack of appendicitis while serving in the military doesn’t earn you any benefits or accolades. So, in a case of stolen valor, former Marine Brandon Blackstone used another Marine’s combat story to get years of disability benefits and a free house.

In 2004, Blackstone served with 1st Battalion, 7th Marine Regiment out of Twentynine Palms, CA. So did Casey Owens. Both men deployed to Iraq.

Casey was critically injured and lost his legs when his Humvee hit an anti-tank mine. He committed suicide in 2014 after a decade of suffering from numerous surgeries, brain injury and severe pain.

Although he may have actually witnessed the event, Blackstone wasn’t ever injured in Iraq. But he was evacuated with appendicitis. Owens’ Marine buddies say they believe Blackstone took key details of Owens’ combat injury and made them his own so he could bilk the government and charities out of hundreds of thousands of dollars.

In a rare prosecution, Blackstone has been handed a 21-month federal sentence for faking a Purple Heart and he will also have to pay back more than $300,000 to the U.S. government and a Texas charity.

Blackstone claimed he had a traumatic brain injury and post-traumatic stress disorder after “his” Humvee hit a mine in Iraq.

After receiving a 100% disability rating, Blackstone began receiving disability benefits from the VA, which he received for nine years. Claiming to have a Purple Heart, Blackstone was also awarded free house from the Military Warriors Support Foundation.

Blackstone immersed himself in the veteran community. But that proved to be his undoing when other 7/1 Marines exposed him as a fraud.

Blackstone pleaded guilty to one count of wire fraud and one count of fraudulent representation about the receipt of a military decoration for financial gain.

Justin Sparks, Blackstone’s defense lawyer, disagreed that Blackstone was stealing Casey Owens’ story, and claimed that his client was diagnosed with PTSD and suffered a head injury in Iraq, just not in combat. He also said that a higher-ranking Marine “informally” awarded Blackstone a Purple Heart medal, but it wasn’t an official award.

“Brandon never claimed his lost his legs,” Sparks said. “The only common elements in the two stories are PTSD, the Purple Heart and head injuries. There must be at least 1,000-plus soldiers who have those three things.”

At the end of the day, what Blackstone did was disgraceful.