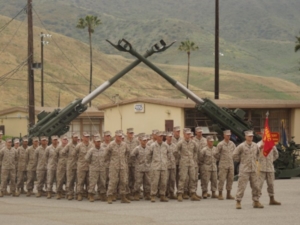 The Marine Corps has announced that as part of its fiscal year 2018 budget, the service branch will pay out $10,000 to Marines who sign their re-enlistment by September 30, 2017. The bonus is in addition to any Selective Retention Bonus.

“Retaining our experienced and qualified Marines remains one of the Commandant’s highest priorities,” the Corps announced in the budget document released on July 6th. “Achieving retention goals is vital for shaping and sustaining the Marine Corps’ enlisted force.”

Marines are eligible for retention bonuses based on their rank, military occupational specialty and how much active-duty service they have in the military.

Marines who volunteer to serve as drill instructors, recruiters, or security guards will get a bonus of $20,000. The highest bonuses will go to Zone B Marines (who have between 6 and 10 years of service) in the 2612 cyber MOS, who are eligible for a rate of $98,500 over a six-year reenlistment period.  But according to Capt. Scott Steele, career force planner at Manpower & Reserve Affairs, there are only eight Marines who are eligible for that particular payout.

The other service branches have all announced similar plans to rebuild force structure with the exception of the Navy, which decreased 14 selective reenlistment bonus levels and eliminated six skills from the list of bonus-eligible careers.

“The intent is to keep them  — to the maximum extent possible  — within the unit that they’re already in,” said Col. Gaines Ward, manpower plans officer for Manpower & Reserve Affairs.

“It’s a greater return on the investment for the time that the commander puts into training these individuals to have these qualifications.”