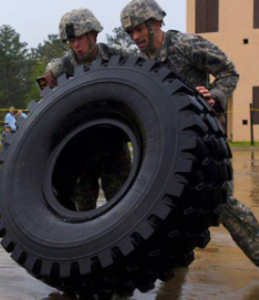 For the first time in the competition’s 33 year history, a National Guard team has won the Army’s Best Ranger.

After coming in second place two years in a row, Capt. Robert Killian and his partner, Staff Sgt. Erich Friedlein, were named the winners of the 2016 Best Ranger Competition.

The grueling competition, held each spring at Fort Benning, is open to soldiers who have already completed Ranger School, a challenging three-month infantry training course.

Following a 60-hour event at Fort Benning, Georgia, Capt. Killian of the Colorado Army National Guard and Staff Sgt. Friedlein of the Pennsylvania Army National Guard earned their place in Ranger history. All of the competitors are put through events that test their physical conditioning, Ranger skills and team strategies.

A five-time competitor of the event, Killian said, “It’s a big thing for the Guard and I’m humbled and honored to be the first.”

“It still really hasn’t totally sunk in yet,” Friedlein said. “I’m just really amazed. I can’t believe we did it after the three days of struggling and just constantly trying to chip away at first place, then taking the lead after night orienteering and losing it on the obstacle course, just fighting all the way to the end.”

Killian said he plans to return to the competition again next year with a former teammate now taking the Special Force qualification course.

The Best Ranger Competition was established in 1982 and has been compared to Ironman and Eco-Challenge competitions.