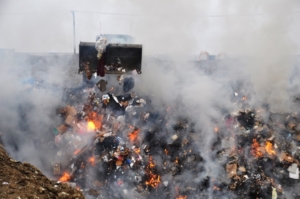 The judge ruled that KBR could not be held liable for a military decision to use burn pits for waste disposal. Burn pits produced billowing toxic smoke night and day.

The plaintiffs charged that KBR, a government contractor and former Halliburton subsidiary, operated the burn pits in Iraq and Afghanistan irresponsibly, running them in locations near U.S. troops’ living quarters and work spaces, and burning items that were not intended for the pits, including paint, batteries, computers, fuel, plastic water bottles and human medical waste.

National Guard veteran Amie Muller succumbed to pancreatic cancer earlier this year. She believed it was a result of deployments to Iraq and exposure to burn pits.

In addition to cancer, plaintiffs say they suffer from a range of diseases resulting from exposure: respiratory illnesses such as life-threatening constrictive bronchiolitis, gastrointestinal disorders, and neurological problems

Susan Burke, a Baltimore-based attorney who represents the plaintiffs, will file an appeal to the 4th Circuit.

The litigation, which consolidates cases across the country, contains 63 complaints, including 44 national class action suits.

Titus said in his decision that he had no doubt that “many of (plaintiffs) have been harmed, at least, by some extent by the use of open burn pits or by the water they drank in Iraq or Afghanistan.”

But, he wrote, “The decision to use the burn pits was not made by the contractors but rather than by the military.”

A spokeswoman for KBR released a statement saying, “KBR believes the court made the correct decision, and we are pleased that this legacy case is one step closer to final resolution.”