In February, the primary tool to introduce the blended retirement system (BRS) to active and reserve component service members will be a two-hour online course that explains features and compares potential lifetime values with the legacy “High-3” retirement plan. They also will have access to a new online calculator to compare BRS with High-3 using age, years expected to serve, planned contributions to Thrift Savings Plan (TSP) with government matching (a key feature of BRS), historic rates of return on TSP investment options, personal tolerance for investment risk and more.

Now if that first paragraph made your eyes glaze over, financial guru Suze Orman wants to help.

Orman has recently formed an educational partnership with the Army, one that is accessible to all service members on SuzeU.com. Using the coupon code “USA” the program, which typically costs $54, is free for troops using the code.

Orman wants those in the military to protect their money as aggressively as they do the nation.

Servicemembers  with less than 12 years of active duty service and National Guard and Reserve members with less than 4,320 points will have until Dec. 31, 2018 to choose whether to remain in the current system or opt into the new one. The new blended retirement system is a three-pronged program.

Prong 1 consists of a defined pension benefit upon retirement. Prong 2 consists of a Thrift Savings Plan (TSP), which is similar to a 401K plan. And Prong 3 is a one-time continuation payment for Soldiers with eight to 12 years of service.

Orman said the military is moving to BRS for the same reason most companies have trimmed or replaced their defined pension plans with employer contributions to portable 401k plans: It saves them money.

“If you’re smart and you let me teach you, I can show you how you can have more money [with BRS] than if you stayed with the simple legacy system,” Orman said. 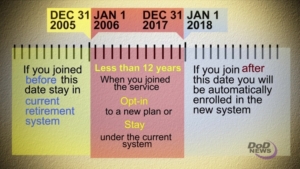