Tag Archive for: bonuses to soldiers

You are here: Home1 / bonuses to soldiers 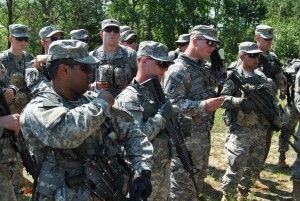 The Army is working on a proposal to pay bonuses to soldiers who deploy on non-combat tours that take them away from home. If Army leaders green-light the plan, it would still have to be approved by the Defense Department and Congress.

Incentives would give soldiers extra cash when they’re deployed, away from home and family. This could mean more pay for soldiers in Japan or Malaysia or Kenya. Or even possibly those away from home for weeks at a time for a rotation at the National Training Center at Fort Irwin, California.

This latest proposal is part of a larger Army effort to reduce the number of non-deployers in uniform.

Army Chief of Staff Gen. Mark Milley has said that readiness is the service’s top priority.

“We must ensure the Army remains ready as the world’s premier combat force. Readiness for ground combat is — and will remain — the U.S. Army’s No. 1 priority,” Milley said.

According to the Army, approximately 10% of soldiers (active, Guard and Reserve) are currently non-deployable. About three-quarters of non-deployable soldiers are due to medical reasons. They could be receiving treatment for short term or long term medical issues.

The other one quarter are usually non-deployable due to legal or administrative issues.