You are here: Home / Blue Angels 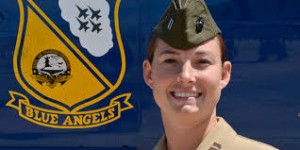 “I definitely appreciate the support from the American people, and if I can bring attention to opportunities people have in life, girls included — that they can join the military, be a Marine, even be a Blue Angel pilot, then that’s cool.”

Higgins, 29, is a third-generation military aviator. Both of her grandfathers flew in the military, as well as her two uncles and father, Bill Johnson, a 1981 Naval Academy graduate. Her brother graduated from the Naval Academy in 2010. “I grew up with a love for flying because of my family,” she said.

The Navy estimates that each year 11 million people watch Blue Angels air shows, which happen weekly, around the country, March to November. The best part about being a C-130 pilot is working together as a crew, Higgins said. “We have two pilots on the plane, a navigator, a flight engineer and a loadmaster. So there’s five of us that it takes to fly this aircraft.”

The selection process to join the Blue Angels is intense. It includes a long application, essays, and a microscopic look at personal and professional lives by Blue Angels officers.

In Higgins’ case, it came down to her and one male competitor.

She was told that she was selected because she was the best person for the job, not the best woman,

Only 7 percent of the Marine Corps is female to begin with, and pilots are subject to height and weight restrictions that sideline many women. Out of 5,223 flight officers in the Marine Corps, 197 are female.

“I didn’t come to the team to break any barriers or smash any glass ceilings,” Higgins said. “They don’t want to fill any quotas. They want to fit the right person, ensuring you’re the right puzzle piece for that next year’s team.”