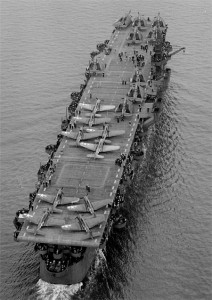 A World War II-era aircraft carrier was found on the ocean floor near California’s Farallon Islands, and it’s seems to be in great shape.

The USS Independence CVL-22 had been the lead ship of its class of light aircraft carriers that were critical during the American naval offensive in the Pacific, and later was one of more than 90 vessels assembled as a target fleet for the Bikini Atoll atomic bomb tests in 1946. After returning to the United States, the blast-damaged carrier was scuttled in 1951.

Despite being underwater since 1951, the Independence is “amazingly intact,” said officials with the National Oceanic and Atmospheric Administration. The rediscovery of the Independence offers a fascinating glimpse into American military history.

The expedition to locate and survey the Independence was led by the National Oceanic and Atmospheric Administration, with help from the Navy and Boeing, which mapped the wreck, using an 18.5-foot-long autonomous underwater vehicle named Echo Ranger. The team created a 3-D sonar map of the ship, which was sitting upright on the ocean floor.

The 623-foot-long ship took a remarkable degree of punishment over its 10-year career, said NOAA official James Delgado, chief scientist of the Independence mission. “After 64 years on the seafloor, Independence sits on the bottom as if ready to launch its planes,” said Delgado “This ship fought a long, hard war in the Pacific and after the war was subjected to two atomic blasts that ripped through the ship.” The Independence was sunk on Jan. 26, 1951, and came to rest 2,600 feet below the ocean surface.

The Navy has been aware of the ship’s whereabouts for decades, but the location was intentionally withheld. And it remained a secret until the U.S. Geological Survey pinpointed its likely location while mapping the sea floor in 1990. In 2004, a NOAA ship captured a distant image of what looked like a giant caterpillar stretched on the bottom of the ocean, said Delgado, who has led a two-year mission to find and study historic shipwrecks in and around the Gulf of the Farallones National Marine Sanctuary.