You are here: Home / Belgian Malinois 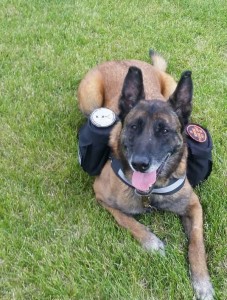 A bomb-sniffing combat dog who earned two Bronze Stars during two tours in Iraq in a Special Operations Forces unit was shot to death by a bicyclist who felt the hero canine was a threat.

Now his owner, Army veteran Matthew Bessler, is asking for a burial with military honors for his dog.

Mike, a 10-year-old Belgian Malinois, was killed in Wyoming by a bicyclist who says the dog attacked him. There were no witnesses, but the man told police he used his bike as a shield from the attacking dog.

Mike served with Bessler in Iraq in the U.S. Army acting as a combat dog and in bomb detection. When the pair returned from their deployment, Bessler adopted the military canine. Mike helped Bessler transition back to civilian life.

But Mike was more than just a companion.

Bessler shared, “I raised him and trained him as a puppy, and the ability he has to sense some of the issues that I have with seizures, with my PTSD, my TBI (traumatic brain injury) and severe anxiety disorders, how he can calm me down just by him being in my presence.  He can help take the focus and help change the focus of what’s going on with me and help me calm down or relax me.”

The unnamed bicyclist who shot Mike told law enforcement that he felt threatened by a pack of dogs that he encountered while on the road.

Bessler, who was out of town at the time of the shooting, does not believe the cyclist’s claims that Mike was acting aggressively enough to warrant the shooting.

“If the guy was actually fending the dogs off with a bicycle, (Mike) would have really been barking, and there was no barking,” Bessler said. “The guests who were at the house, they said the same thing. There was no barking. It was just a gunshot.”

A GoFundMe account for Mike was created, and has already surpassed its initial goal to raise $10,000. The additional donations will be distributed to a program that honors and supports military war veterans.

“We are a community coming together to mourn the loss of a brave military service dog, who deserves the honor to be laid to rest with a military funeral and burial,” according to the account.
The 59-year-old bicyclist has not been cited for any wrongdoing.