Tag Archive for: BCI based communication

You are here: Home1 / BCI based communication 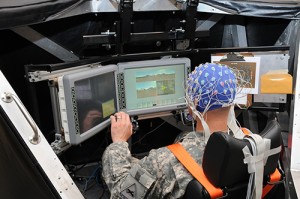 What if you could communicate via a cellphone or radio without uttering a sound or moving a finger? What sounds like science fiction is becoming a reality.

The Army Research Laboratory is funding research into brain-computer interfacing (BCI), the technology that allows paralyzed individuals to move robotic limbs. The exploration of this technology has the potential to revolutionize both medical applications and the ways that Soldiers communicate on the battlefield.

Recent advances in hardware and software, in addition to breakthroughs in neuroscience and cognitive science has resulted in the ability to perform functions such as typing, making phone calls and controlling a robotic arm, solely by thinking.

The laboratory is funding two projects. The first is to develop a prototype system for detecting imagined speech and monitoring a user’s attention and orientation by recording brain activity in real time.

While it may take many years, or even decades to grow BCI technology, Dr. Liyi Dai, program manager in the Computer Sciences Division at ARL’s Army Research Office, and his fellow researchers are confident that further progress means potentially great capabilities for Soldiers.

“Progress in BCI based communication is potentially of great importance to the warfighter because BCIs would eliminate the intermediate steps required in traditional human-machine interfaces. Having a Soldier gain the ability to communicate without any overt movement would be invaluable both in the battlefield as well as in combat casualty care,” Dai said.

Scientists are working hard behind the scenes to bring this technology to fruition and make it applicable in real-world situations for the benefit and protection of our Soldiers.